Nassim Nicholas Taleb’s book, “Antifragile,” is a wealth of information. I’ve returned to it often since first reading it several years ago. My latest revisit has been to better understand his ideas about representing the nonlinear and asymmetric aspects of fragile/antifragile in terms of “concave” and “convex.” My first read of this left me a bit confused, but I got the gist of it and moved on. Taleb is a very smart guy so I need to understand this.

The first thing I needed to sort out on this revisit was Taleb’s use of language. The fragile/antifragile comparison is variously described in his book as:

Tracking his descriptions is made a little more challenging by reversals in reference when writing of both together (concave and convex then convex and concave) and mis-matches between the text and illustrations. For example:

Nonlinearity comes in two kinds: concave (curves inward), as in the case of the king and the stone, or its opposite, convex (curves outward). And of course, mixed, with concave and convex sections. (note the order: concave / convex) Figures 10 and 11 show the following simplifications of nonlinearity: the convex and the concave resemble a smile and a frown, respectively. (note the order: convex / concave)

After this presentation, Taleb simplifies the ideas:

This was helpful. The big gain is when Taleb gets to the math and graphs what he’s talking about. Maybe the presentation to this point is helpful to non-math thinkers, but for me it was more obfuscating than illuminating. My adaptation of the graphs presented by Taleb: 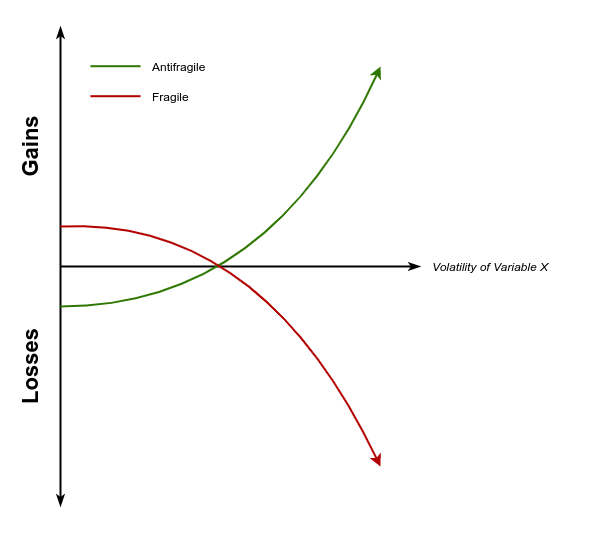 View all posts by Gregory Engel